Addiction: A Father’s Story of Hope

Previous Next
Addiction: A Father’s Story of Hope

Steve Killelea and his Son John (pictured above)

Hope For Recovery in Upper Providence

When a parent dreams about a child’s future, those visions are filled with hope, promise, and success. Like every parent, Steve Killelea only wanted the best for his son, John.

Unfortunately, those dreams were shattered.

Steve uses phrases and words with positive connotations when describing John’s adolescent years. Words like sports, good grades, academic success, college, and well-rounded were descriptions of the John whom everyone knew. What they didn’t realize at the time was that when John left for college those adjectives would lie dormant as ominous words like stranger, thief, dishonest, and defeated took their place. John made a choice to take one OxyContin at a party. The pill that “made John feel the best he had ever felt in his life” would be the beginning of a downward spiral into the darkest depths of defeat. Steve recalls the fateful year in 2005 when he had to admit that his son, who once excelled in life, was now “a full-blown heroin addict by the end of his freshman year of college.” As a parent, guilt fills your heart with the smallest mishaps, but why couldn’t Steve and his wife see the signs? Were there signs? Aren’t there always signs when a child is in distress? In retrospect, there were signs of addiction. Steve remembers when John came home from college for his first break and thinking that he “didn’t seem right.”

A few nights after John returned to college after break, Steve and his wife planned to have a movie night. When they went to retrieve a movie from their extensive collection, alarmingly they were all missing. This quickly made Steve question all the peculiarities happening around him. Where was the money he left in his car? Why was he missing so many things around the house? Sadly, all paths led to John.

Steve researched every possible treatment plan in the nation so he could save his son. For ten years, the family’s life would unravel. John would enter treatment centers, check himself out, live with other family members, lie to his parents, all while continuing to use heroin. Steve, now divorced after years of stress and struggle, watched as his son created a world where all sense of self pride was washed away. John was at rock bottom. Steve recalls, “I went to bed with tears in my eyes every night. I failed as a father. I knew that the next phone call would either be from the police or the coroner.” After 10 years, something changed. Steve awoke one night to “a crystallization moment.” He spent the next three days researching alternative treatments and found a program in Canada with a different approach that offered promise. This program was like no other he had come across. The dramatic difference to the care of the individual, their future successes, and how they guide the patients beamed a ray of hope into Steve. There was still a significant obstacle that stood in Steve’s way. How was Steve going to locate his homeless, heroin addicted son in Florida and convince him to travel to another country for treatment? Ironically, John happened to call and immediately Steve recalls that “This call was different. John was asking for help and agreeing to my stipulations.”

The program in Canada saved John’s life. John has been clean since June 23, 2014. Unbeknownst to them this rescue mission would impact the lives of many. Now it was time for Steve to begin working to assure that individuals here could get the help they needed. He was going to repair lives in the community where his own life had been broken. This nightmare led Steve on a mission to develop Manor of Hope, an Extended Care Drug & Alcohol Addiction Support Program located in Phoenixville. Manor of Hope offers “long term support and continuing care for young men with substance abuse issues including opioids,(heroin, morphine, fentanyl, prescription painkillers), benzodiazepines, cocaine, marijuana and alcohol addiction.” Out of pure selflessness and an inspired passion for helping to change lives, Steve and his fiancé, a woman who would share his compassion and drive, entered a new chapter in their lives. In October 2015, they purchased a home and began renovations. In January 2016, the doors were open to this “long-term and highly structured program that provides young men the tools they need to battle the disease of addiction and live a drug or alcohol-free life.” 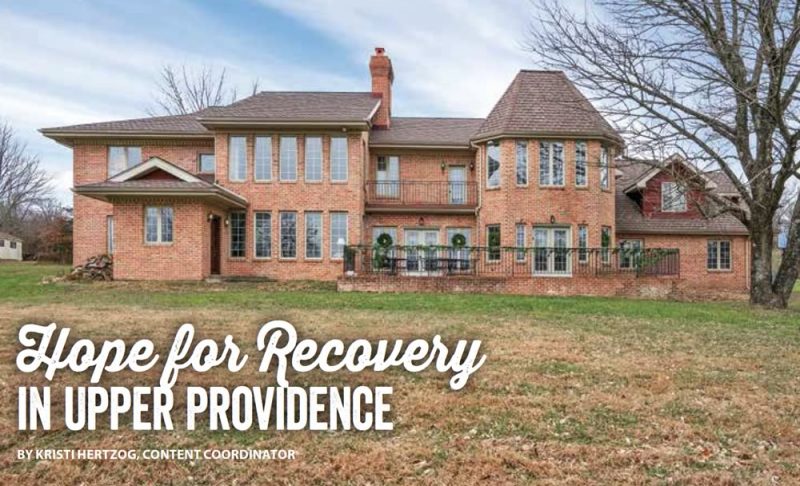 Hope on the Hill, Manor of Hope Graduate House (pictured above)

At Manor of Hope recovering addicts are given vocational and educational training so they can leave the program with dignity. “We help them with their finances and train them for a profession.” Building self-esteem and self-worth is a priority for Steve and John. Never could Steve have imagined that the devastating chapters in his son’s life would take triumphant turns as their team saves lives every day.

If you or someone you know is facing similar struggles, I urge you to visit the Manor of Hope website. There you will find more about what makes the program unique, the Building Futures Program, read about Life at the Manor, take a virtual tour, and you can connect with Steve personally.