Helping our neighbor after the storm

Previous Next
Helping our neighbor after the storm 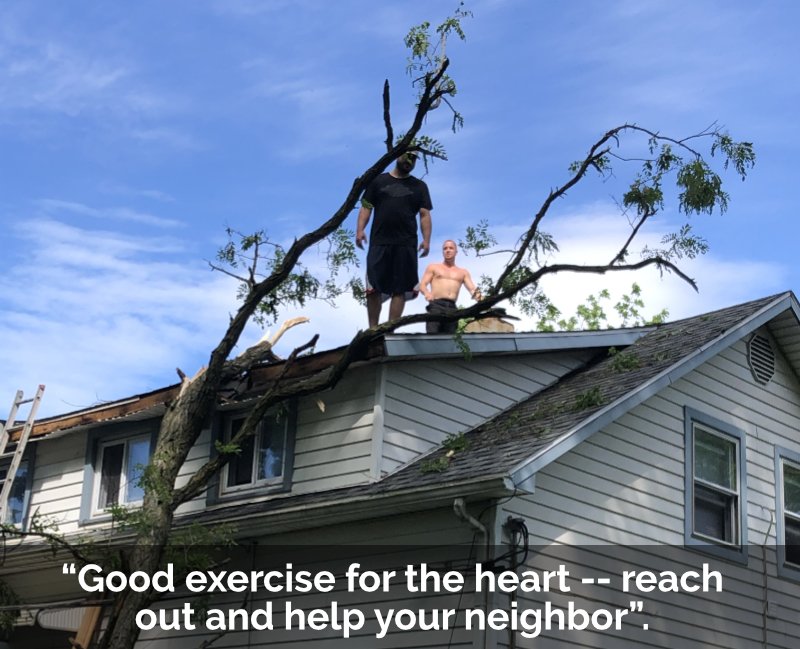 Last Wednesday was an interesting day for sure!

As usual, the manor crew was up and active early in the morning.  We had our daily 8:15 meeting and then proceeded to complete the morning chores.

At mid-morning, the entire team was outside doing yard work and picking up sticks and debris to burn in the fire pit.  Little did we know that a massive storm was in the works and headed our way!

We completed the yard work at about 11 am and continued with all of the regular daily activities.  As the team sat for the 11:30 am meeting, the skies started to turn dark.  And then just a few short minutes later, Mother Nature unleashed a furious wind that roared like a freight train at full speed. That’s when the rain started to come sideways and trees were bending from the strong winds. Branches and leaves started to fall, some small but there were lots of large ones falling which made it dangerous. It was certainly not your run-of-the-mill storm.

Even though the storm was short-lasting. around 20 minutes or so, it packed a punch.

About an hour later the sun was out again – the aftermath was definitely impressive. The yard that the Manor of Hope guys had worked so hard to clean earlier in the day, was covered in trees and branches of all sizes.  However, other than a cracked sunroof on one of the vehicles, the Manor house didn’t suffer any serious damage.

However, our next-door neighbor wasn’t to so lucky.

A large tree fell on his roof, damaging the roof and taking down a power line in the process.

As soon as it was safe to assist, the Manor guys were out and up on the neighbor’s roof, clearing branches and debris, and helping to patch up the roof until it could be officially repaired.  Once the tree was removed from the house structure, the guys chopped it up and cleared the neighbor’s driveway too. The guys also cleared most of the branches and trees all around the Manor’s property (again!).

It was great to see the guys assisting our neighbor when help was needed.

We considered ourselves lucky that we didn’t have any serious damage.  Many Phoenixville residents are still without power from this serious storm.  We hope everyone is doing ok.