Labor Day Weekend at the Manor of Hope!

Previous Next
Labor Day Weekend at the Manor of Hope!

Although Summer is drawing to a close, that didn’t prevent the Manor of Hope guys from taking advantage of the dog days of the season.

Here’s what happened on their Labor Day 2017 weekend! 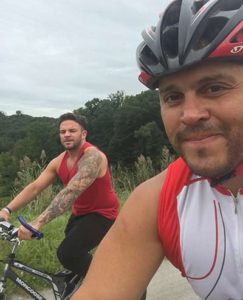 While some of the guys where working on a special project, Doug and Jose headed out to Marsh Creek for some mountain biking fun.  They hit the trails hard, zipping through the downhills, cutting through sharp turns and bumping through rock gardens.

The weather was perfect, a cool 60 degrees with the smell of Fall in the air. After a few hours rolling up and down the hills, it was time to head back. They joined the rest of the group at the gym for a few games of basketball.

Later that evening the group went to a 12 Step meeting and returned to he Manor for a meal of steak fajitas with all of the fixings.

Sunday was another special day. The atmosphere at the Manor was electric!

The guys were up and ready to go early in the morning. Our destination: Pocono White Water Rafting Adventures. The guys were really excited about a challenging day on the rapids. After a quick briefing, the crew jumped on a bus and headed to the launch site. There were 5 guys on the raft.

The ever competitive nature of the guys kicked in full gear as they were the first boat in the water. That same competitive nature kept them well ahead of a pack of over 30 boats, and leading each section of the rapids throughout the day. It was amazing to see how the guys worked as a team to overcome the challenges each of the rapids presented. The team captain called clear orders from the stern of the raft… Right!, Left! Forward! The team mastered each section of rapids with grace and skill. 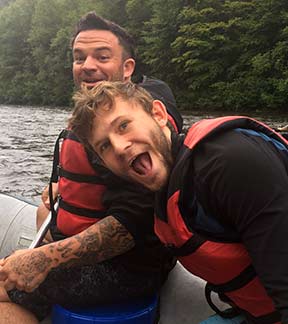 There was a moment in which the raft got jammed on a rock and the force of the water destabilized the boat, causing two of the crew members to fall in the water, but within seconds the team dynamics kicked in again and the guys in the boat swiftly pulled the two members from the water and they forged ahead as if nothing had happened. The rest of the trip down river continued to be challenging, and the guys were eager to embrace each challenge.

A remarkable display of kindness occurred over lunch. The Manor crew realized that a large group of people
didn’t have anything to eat. Water from the rapids had flooded their lunch buckets and all their food was spoiled.  The Manor crew shared their lunches with this group and were thanked for their kindness. After lunch, the manor crew kept paddling hard, staying well in front of the other boats   When the crew wasn’t busy navigating the rapids, they were mesmerized by the breathtaking views of the Lehigh gorge.

When the guys finally arrived at the pick- up location, they tossed Jose in the water to celebrate the big finish!