The Cattledogs Season is in full swing! The guys are once again taking their talents to the field in the Phoenixville Men’s Softball league.

This year the Manor of Hope team chose to play under the “Cattledog” name, in honor of our very own house companion Scout who is an Australian Cattle Dog. 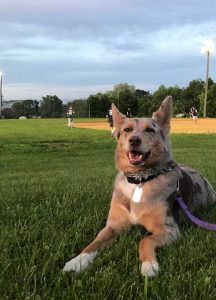 This season’s roster is comprised of members of both current and former members of the Manor of Hope community as well as friends we’ve made along the years.
The team was excited to chalk up a win in the first game before running into stiff competition in the past two bouts!
The guys are also very excited to be stepping up their hitting game after they recently received a generous donation of a full size batting cage and pitching machine.  Construction on the project will begin in the coming days and will provide great fun for years to come.
Be on the lookout for more updates as the season heads into the summer months….
Manor of Hope2019-06-07T12:40:36-04:00