On Friday, February 22nd, the guys from the Manor of Hope took a much anticipated skiing trip to the Bear Creek Mountain Resort in the Lehigh Valley. 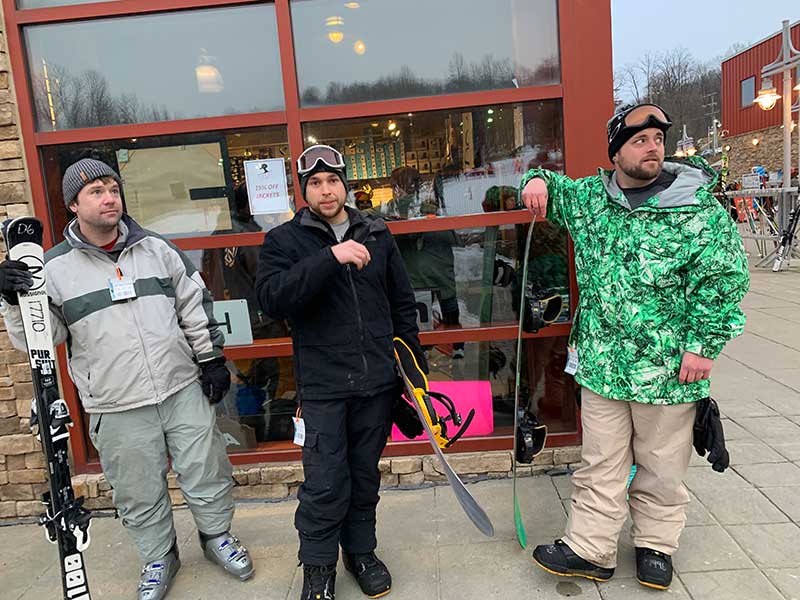 They lucked out with a gorgeous, warm and clear night on the mountain.  The guys couldn’t wait to get one last taste of the slopes before the Spring season begins to creep into Southeastern Pennsylvania.

On both skis and snowboards, everyone put on their game faces and faced their fears on the slopes and the terrain park!

Some of the guys hadn’t been skiing in years including Matthew who hadn’t been on a snowboard in quite some time, but after only one run was zipping down the mountain. James was also a natural on his board and rode the rails like a pro. Scott, Dan and Hayden decided to ski and were all comfortable like they were regulars on the slope – although, Hayden was a true dare-devil and attempted the toughest moguls on the mountain. He was unafraid of completely wiping out – which was good, because he did regularly!

The night was filled with high speeds and big jumps as well as some very tasty mountain food to ease the pain of all the wipeouts!

Everyone was fired up and it was a challenge for the guys to pack up and leave the mountain when it closed. They will just have to wait until the next Manor of Hope escapade!

Another fun, successful adventure! The rest of the guys who didn’t go on the ski trip stayed at home at the Manor and shared a great dinner at PF Changs and a relaxing evening playing board games.

Check out the pictures of the action below!