Previous Next
The Bulldogs Season Opener 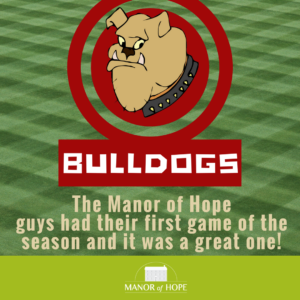 The bulldogs had their first game of the season and it was a great one!

The day was another of those days where winter seems to be hanging on.  There were clouds, a cold wind, a misty rain and even a bit of sleet throughout the day. The temperatures were hovering at around the 45 degree mark, chilly.  But with the sun hiding behind the clouds and the wind blowing, it felt much colder than that.
We were all uncertain.  We were all wondering: “do you think we will play today,” “will the game be on”? Everyone was hoping the game was on.  No cold wind or drizzle was stopping the Manor Bulldogs in their season opener.  At at around 4:00 pm we got the confirmation. The game is on! The entire house erupted in cheers. Shortly after, everyone had their uniforms on and we were on our way to the field.
We arrived with plenty of time to practice. Led by team captains Dan and Doug, the team warmed up with throws, and then fielding and batting practices.  Before game time, Dan gathered the guys for a brief speech, and he concluded by saying: “LETS HAVE FUN, Go Dawgs!”
We were ready to go.
Parker was lead off batter, hitting a grounder. He used all his speed to get to base. Another round of hits ensued and shortly after Parker came zooming in for our first run.  The game turned out to be a great, fun game against a formidable opponent.
In the end, the bulldogs didn’t get the win, but we all had a great time on the field.
Manor of Hope2018-04-20T10:36:33-04:00