Some of the Manor of Hope guys brought their talents to the Steel City Coffee House in Phoenixville, PA and played several songs at the open mic night last night! 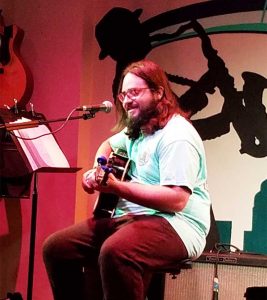 Peter on guitar and vocals

The Steel City has a vibrant open mic night every Thursday evening and the guys were able to show off their talents to a packed house!

The guys have been practicing faithfully every day and enjoying the creativity and challenges of playing their instruments. They have also been really focusing on playing together as a band and tightening up their sound. All of their practice has paid off and they put on a great show!

First up on stage was “Silent Bob”.

Peter (Silent Bob) performed a solo set and sang two songs to a very receptive audience. Both songs were covers and very introspective. He really shined on his intricate acoustic guitar playing. 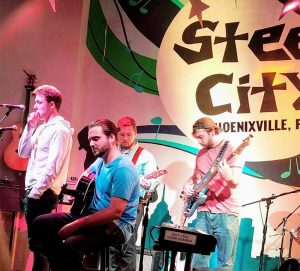 Next up was “Pat” with 5 members: Ryan on vocals, Justin on bass, Patrick on lead guitar, Sam on rhythm guitar and Max on drums (who amazingly just started playing only a few weeks ago!).

The guys started out with a  classic cover tune of Pink Floyd’s “Wish You Were Here” and brought down the house! Ryan’s vocals really sounded like David Gilmore, the lead singer of Pink Floyd and the song was expertly played by all.

The next song they played was an amazing original rap tune by Ryan that he wrote about his mom. The guys laid down a tight groove in the back and Ryan’s lyrics were really poignant.

All the guys had a great time and are looking forward to playing at next week’s open mic night where they can showcase their talents again!