The Manor of Hope Guys Go To Gettysburg

Previous Next
The Manor of Hope Guys Go To Gettysburg

This past weekend, the Manor of Hope team was on the road again.  This time, our destination was Gettysburg, PA.

The crew left the Manor of Hope bright an early on Saturday morning. A few hours later, we were pulling up into our campsites at Caledonia State Park, a mountainous state park adjacent to the Appalachian trail in Fayetteville, PA.  The team diligently unloaded all the camping gear and set up camp.  When all was said and done, there were 7 tents in total, resembling a small expedition!

Once all the tents were set up, the guys set the easy-ups over the picnic tables and grabbed a quick lunch to get ready for the rest of the day. After lunch, half of the guys headed out to Gettysburg to do a tour of the battle field on Segways, while the other guys decided to stay back and do a little bit of hiking and exploration.

The group at Gettysburg had to complete a rigorous training and instruction on how to ride the Segways before the  guys were allowed to hit the streets! Segways aren’t as easy as they seem,  but after a little bit of instruction and practice, everyone ready and the gang ventured out and into the streets of downtown Gettysburg! The guys rode around and made their way to the battlefield. Everyone had a great time learning about the history of Gettysburg and riding the Segways through the winding hills of the beautiful park.

Halfway through the tour, we took a break from the Segways and climbed up the Gettysburg National Tower.  The views from the top of the tower were amazing.  We stood up there and marveled at all the history that surrounded us. After spending a bit of time up there, we headed back and continued the tour. We drove past a battle re-enactment and some other great sites throughout the park as we wrapped up our tour.

Once we finished the tour we headed back to the campsite which was about 20 minutes away.  It was time for dinner! The Manor crew had been busy and active since early in the morning, and everyone was hungry.

Within a few minutes of arriving at the campsite, priorities were evident: a fire was roaring and the burgers and dogs were cooking.  Everyone sat down to eat and enjoy some downtime before the next adventure.

What was our next adventure? Walking ghost tours!

In the evening, they crew went back into the town of Gettysburg to meet with our designated guides.  The ghost tour started at around 7pm at Jane Wade’s house. Jane Wade was a civilian victim of the civil war, and it is rumored that her ghost visits her old house frequently.  Our guide said she had even witnessed her ghost!

Our tour continued all around town stopping at various spots where paranormal activity is frequent.  We were told to pay special attention to all our our senses… a smell of sulfur or gun powder, a sudden chill in the air, the sound of muskets and cannons… all markers of paranormal activity. The tour concluded at dusk, and sadly none of our guys witnessed any paranormal activity.  But it was fun nonetheless!

We still had a little bit of time left so the gang decided to take one last drive through the battlefield.  Rob led the charge up little Round Top as he explained how the battle unfolded on  the hill overlooking the devils den. The crew walked along little Round Top until it was too dark to see and then we all headed back to the campsite where everyone sat around the fire and ate s’mores and talked about the day for a while. Unfortunately rain soon took over and everyone retreated to their tents for a good night of sleep.

A big thank you to Elliot, Manor of Hope alumni, for volunteering his time to help the guys at the manor during this trip.

And a big thank you to all the manor guys for making this a successful trip. Everyone had a hand in the planning of it, specially Rob, James and Hayden.

See you on our next adventure!

Email us for more information or to schedule a tour 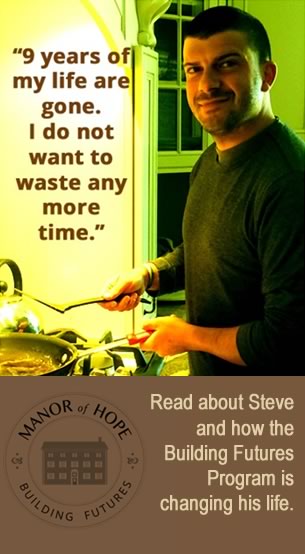 George Hall
15:25 11 Feb 20
My 23 year old son is a resident of Manor of Hope. After many years of treatment followed by relapse, he has truly... found a home. He is fully invested in several treatment protocols, involved in all community activities and is now enrolled in college pursuing a degree in nursing with an emphasis on behavioral health. None of this would be possible without the amazing staff at MOH. Thank you Steve Killelea and team!read more

Jeremy Frank PhD CADC
07:43 08 Aug 17
I'm an addiction psychologist practicing in Philadelphia and Bala Cynwyd and I'm also a certified alcohol and drug... counselor with over 25 years clean and sober and so I know a good sober living arrangement when I see one. Inpatient is not the only way to get clean but recovery houses and sober living facilities can be hit or miss and often run by inexperienced and uncaring albeit well meaning professionals. Manor of Hope is run by Steve Killelea whom I've met and to whom I've referred. Their home is amazing and their program offers real caring and support. Research shows how important structure, supervision, social support, hobbies employment, recreation, spirituality and alternatives to drug and alcohol using activities can be in addition to real treatment. Manet of Hope has all that. While inpatient treatment can cost 20-40K at most inpatient rehabs outpatient treatment and sober living or recovery houses can cost 1/4th that per month and have better outcomes because people can learn to stay clean and sober in the community in which they live. It helps recovering individuals learn to recover with solid and comprehensive support. While it isn't treatment, I think in many ways, Maner of Hope has more to offer than even the best local inpatient treatment centers. Dr. Jeremy Frank Addiction Psychologist at Jeremy Frank Associates, Bala Cynwyd PA.read more
See All Reviews
Have Questions? Want More Information?

Speak with Steve Killelea, our founder.
Your call is private & confidential.

“My son John struggled with a heroin addiction for over 10 years. He went through many different rehab programs in the USA but nothing worked until I found a unique program in Canada which changed his life and mine. He’s been sober and living an addiction-free life for years now. Through this experience, we have made it our mission to help others who cannot  find long lasting help for addiction. I built the Manor of Hope, to be the most comprehensive addiction support program in the nation and we have helped many young men overcome their addictions. I hope you will look at why our program is different from other addiction programs and view our video testimonials from parents and current residents.

If you have any questions at all, please call me directly.“