Previous Next
The Manor of Hope’s Organic Garden Project Update

The Manor’s organic garden project entered hibernation this past week, with the team happy over its progress from the past few months.

From the planning stage right up until grooming of its pathways, the garden has been a labor of love for all involved.  The project began with a vision for the Manor to grow healthy, delicious produce for both consumption in its daily meals and for donation to the community at large.  The garden team consisted of staff, residents and volunteers with the knowledge needed to create something sustainable and beautiful.  Early on we had experienced farmers give input on which ground received the right amount of sun.

The team then worked tirelessly to clear trees (which we split into our winter firewood) and brush from the area.  With chainsaws, shovels and a little help from Doug’s backhoe expertise the space was ready for the next steps. In the end a piece of land a 60 by 40 feet was reclaimed and made ready for the boxes. 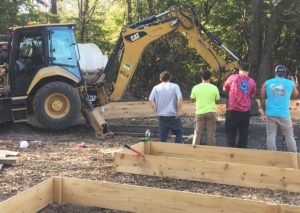 The planning team researched relentlessly for the proper material for its raised beds and settled upon cypress for its safety and durability.  Doug, Jesse, Triston, Parker and the rest then constructed twelve 4 by 16 foot boxes, each measuring a foot high.  The beautifully made beds were then methodically put in place and leveled. The overall design of the placement came from Jesse and Big Steve and will long be their legacy.  The boxes were laid in geometric pattern around Steve’s vision for a central common space.

Under Sam’s guidance the team put in a cement paver patio and walkway, creating a tranquil place in the middle of the garden for residents and visitors to enjoy.  With the hardscaping finished, the team moved to the back-breaking task of filling the beds with 6 cubic yards of topsoil (for those laypeople reading this post, that’s a lot of dirt!).   After a few trips to the county landfill the team had the necessary compost to add to the beds.

Future compost will come from the three bins built earlier in the spring which has been receiving a daily dose of the Manor’s kitchen scraps. Read about how the guys built the compost bin. Next an irrigation system was brought down to the garden area to ensure proper watering.  A project in which the guys learned much about the installing and maintenance of water systems.  The final step before winter was to spread wood chips throughout the pathways and around the perimeter of the boxes.

With spring will come new exciting additions to the project.

In the fall the guys took a trip to Chanticleer Gardens in Wayne, PA to gather some ideas for their own space.  Inspired by that excursion the guys had a pergola designed for the central patio. This will provide more shade for the gathering space and will be built by the team in early spring.  Also from that trip came the inspiration to build a Zen garden adjacent to the organic vegetable beds.  A Zen garden will provide a space of mediation and quiet for all and will feature a water feature fed from the new irrigation system.  There will, of course, also come the planting of the Manor’s first crops which will be done under the guidance of our many, generous partners.

So look for those updates as we come out of winter and plan you trip to enjoy the work and dedication put into these gardens.