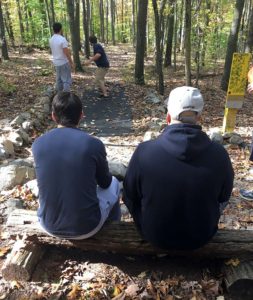 It was another lovely Saturday fall morning. After breakfast was done and morning chores were completed, the Manor of Hope guys were back on the road again. Their destination was French Creek State Park, for a full round of disc golf.
We arrived at the park and the temperature was perfect. The fall colors were just starting to peak, creating a lovely scenery.
We walked into the first hole tee, and the energy was clearly evident. Everyone was excited to play – and to win of course!
After a brief discussion, the game was on, guy after guy choosing his driver disc and giving it his best shot into the woods. Some guys made straight shots, some guys weren’t so lucky and had to hike through the rough and rocky French Creek terrain to look for their discs.
Hole after hole, the competition was intense, and the humor of course was ever present. After 18 holes and a few miles of hiking through the woods, Max emerged the Champion by a small margin.

We headed back to the Manor to catch the Penn State game and go to the 12 step young people meeting in Downingtown later that evening.