On Sunday the crew found themselves once again on the paintball battlefield! 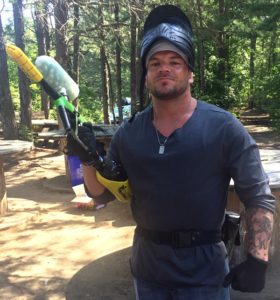 Doug geared up and ready to go!

This time everyone travelled down to Picasso Lake in South Jersey for a sweltering day of team building and fun.   It was Doug’s first excursion since joining the group and he didn’t let his newness hold him back.  Doug and the others were fearless in the face of some seasoned locals, charging hard through the wooded fields.

There were successes, failures and a lot of laughs.

At times the guys were put on opposite teams.  Max, who was joined for the day by his brother Nate, left a literal “mark” on Matthew when he snuck up behind and shot him in the ribs.  Despite at times being enemies the crew left a stronger unit and full of stories.